As November 11th approaches, the visibility of the Great War here at home always increases. In this, the centenary year of the Armistice, many villages up and down the country are doing their bit to pay tribute and commemorate the occasion.

One my local villages, Hawkhurst in Kent, has always been particularly active in its efforts for remembrance. The war memorial sits proudly at the cross roads in the centre of the small village. Unveiled in 1921 it lists the names of 76 men from Hawkhurst who died during the war. Last week, I was amazed to see not one or two, but many different tributes which are being displayed in the village.

There is a small row of almshouses in the middle of the historic high street. They were built in 1723 with money bequeathed by Sir Thomas Dunk, a wealthy ironmonger and former Sherif of London. Each year in November, in the gardens outside there is always a small display of something poppy related, but this year there is a particularly poignant one. There are a number of ceramic poppies which have been made by children at the local school. One for each man from the village who did not return. For me, this link between Them and those who will be tasked with remembrance in the years to come is vitally important… 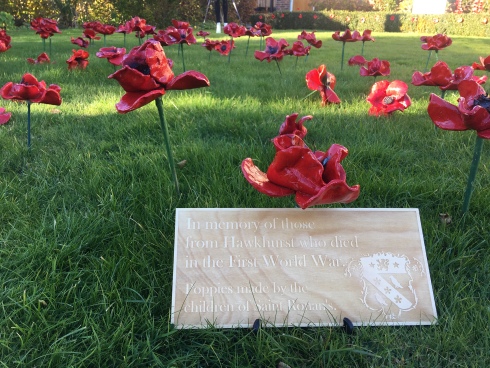 As a ‘millennial’, I am often depressed at the lack of understanding of the Great War among my generation. My generation, is really, the last generation with a link to the war that you can almost touch – for our Grandparents are the children of the men who fought. This link can give us powerful insights into the effects the war had on our families. My Grandma often recalls how her Dad, who served with the Heavy Artillery returned from the war with severe post traumatic stress disorder. He became an alcoholic, as many did, and had terrible problems with his feet for the rest of his life – which tragically wasn’t long. It is in these recollections that we can feel a small fragment of the impact the Great War had on our country and on families, even when men survived.

But, thanks in part to the socio-political vogue of today, many people of my generation have rotten misconceptions. This I can attest to from conversations I’ve had with my peers. Some, aren’t aware of what the Great War is – they couldn’t tell you approximate dates, or which nations were involved. Others hold a much more misguided view that the war should be forgotten, because to remember is to glorify death. That the poppy is a symbol of blood and fighting and should be buried, along with any reference to a time in our country’s past where moral and ethical attitudes do not hold up to the ideals of today.  I fear this view, because to ignore the past and presume there are no lessons to learn, is when we do the greatest disservice not just to the men who fought and died, but to ourselves.

I hope that the strong media coverage of the Armistice this year will help to reach the people of who hold these views, to challenge their understanding and offer them the opportunity to view the Great War in a different light. It’s through the personal stories of the men who fought that the war can be made relatable and that’s something I’ve always been passionate about. I hope in doing what I do, that in some small way,  I can help to challenge the misconceptions that exist among my generation in particular and ensure the Great War is not forgotten in the years to come.