“It would have been utterly impossible for us to have waged a successful war had it not been for the skill and ardour, enthusiasm and industry which the women of this country have thrown into the war.” – David Lloyd George

British Prime Minister David Lloyd George was clear about how important women were during the Great War. It is something which, rather naturally, we tend to over look as our thoughts are so often focused on the men who fought. As we stand here in 2018, up to our mini-skirts (or-not-mini-skirts-whatever-you-want-to-wear-it’s-your-choice) in forth-wave feminism it’s worthwhile looking back to understand the impact women had on the Great War and, perhaps more importantly, the impact the Great War had on women. 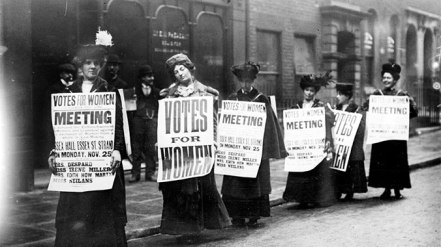 In 1914 it was first-wave feminism that was well underway, rather than forth. This was a wave in white water rapids – a disorganised, underground movement that had begun in the mid-19th century and was gathering pace, yet still ultimately divided a nation. Suffragists had been slogging away for decades, attempting to force a constitutional change through the courts until, after watching New Zealand and Australia give women the vote in the late 1800’s, patience wore thin with the patriarch in Britain and at the turn of the century the Women’s Social and Political Union (whom the Daily Mail christened the Suffragettes) were formed. They were tired, they were angry and they were radical and by 1914 after years of fighting a war – and it was a vicious war, littered with self sacrifice, pain and anguish – women of Britain were teetering on the edge of gaining the right to vote.

As the pace of the war quickened and with the BEF all but decimated, the call to men of fighting age to join up to do their bit became ever louder. The WSPU fractured, as the party’s line of supporting the war effort proved too controversial for many members. Rarely were the peace loving suffragists of the National Union of Women’s Suffrage Societies (NUWSS) in agreement with the WSPU, but leader Millicent Fawcett was passionate that women should not stand idly by and threw the full weight of the 100,000 member society behind the fight for victory. With the WSPU helping to drive the recruitment of women into the workforce and the NUWSS funding hospital units in France among other things, it was clear women had much to contribute.

By 1914 many women were already working, concentrated in certain industries such as textiles but it wasn’t until 1916, when conscription was introduced and the numbers of working aged men in the country fell dramatically, that the impact of the Great War on women and their social standing really began to take shape. Women, after years of being told they were not suitable or good enough to work, were suddenly called upon to plug the ever widening gaps in industry left by the men fighting abroad. ‘These women are doing their bit‘ and ‘On her, their lives depend!’ along with other slogans were emblazoned on propaganda posters pleading with women with take up jobs in munitions factories, for the hell of the western front was swallowing such endless numbers of shells that the need for more was constant.

Work in the factories was tough, hours were long, women were paid less than half the rate that the men left behind were and many women were left with long term health issues that far outlasted the war, as a result of handling the noxious chemicals involved in making these weapons. But their efforts were invaluable, for without the shells, the British Army would have suffered greatly such was the tactical importance of artillery bombardments.

Away from the factories women proved they were capable of other jobs previously reserved for men. The first women police officers and increased opportunities in the civil service and transport industries came women’s way, with employment rates of women doubling from 1914 to 1918. However the issue of wage discrepancies between men and women was starting to cause friction. In 1917 following repeated demands from women for equal pay (newsflash from 2018: we’re not there yet ladies!) the ‘Report of the War Cabinet Committee on Women in Industry’ was released which expressed support for ‘equal pay for equal work’. In addition to this however they concluded that women, with their ‘lesser strength and special health problems’ would never actually be able to carry out equal work – so the equal pay was more or less a moot point. The act would also be temporary and would be revoked as soon as the war was at an end and the men returned – women were not truly welcome in the work place, after all…

During the war, the WSPU and NUWSS more or less suspended campaigning for women’s suffrage. They had faith in the adage that actions spoke louder than words and so, true to this, they let the work of the 1000’s of women throughout the country speak for the cause. In February 1918, it seemed that this tactic had paid off and the UK parliament finally approved an act which gave women over 30 the right to vote. It was a monumental step that was decades in the making. By 1928, the democratic right to vote was extended to women over 21. Women’s suffrage in Britain would of course have succeeded without the Great War, but the opportunity the war gave for women to prove their worth in the workplace hastened the realisation from the powers that be, that this cause was just and right.

Of course it wasn’t just on the Homefront that women supported the war effort. Up to 80,000 women enlisted as nurses to provide vital care to men at the front and some even fought alongside them… but that’s a blog for a different day, for it is such a big subject with many incredible stories of sacrifice to tell from Edith Cavell and Nellie Spindler to Mairi Chisholm.

Let me end with a poem by Siegfried Sassoon, since as I write this, I’m feeling a little Sassoonesque in my general mood.

You love us when we’re heroes, home on leave,
Or wounded in a mentionable place.
You worship decorations; you believe
That chivalry redeems the war’s disgrace.
You make us shells. You listen with delight,
By tales of dirt and danger fondly thrilled.
You crown our distant ardours while we fight,
And mourn our laurelled memories when we’re killed.
You can’t believe that British troops ‘retire’
When hell’s last horror breaks them, and they run,
Trampling the terrible corpses–blind with blood.
O German mother dreaming by the fire,
While you are knitting socks to send your son
His face is trodden deeper in the mud.